Summary (full text is available for purchase)
This Financial and Commercial Viability Study is 'Deliverable 2' of the Grand Turk Water-producing Greenhouse (WPG) Viability Study. It is addressed to the supporting agency, CIDA INC; people and government of Turks and Caicos Islands (TCI); suppliers and advisors to the project, and potential investors and financiers.

A customized financial model is the core of a Business Plan that allows us to simulate and analyze a business producing fresh water and food crops in Grand Turk (GT).

Selected aspects of the economy are reviewed. TCI (population 25,000) has an economy based on tourism, offshore finance, and fishing. Imports exceed exports and there is a need to improve the balance of trade. Tourism visits exceed 165,000 annually and are growing at a 10% rate. Agriculture is limited. Electric power is provided by diesel-fueled generating plants. TCI has constrained fresh water resources, especially on Grand Turk. Airfreight is the main mode of transporting goods within TCI. Marine container services are adequate to Providenciales. 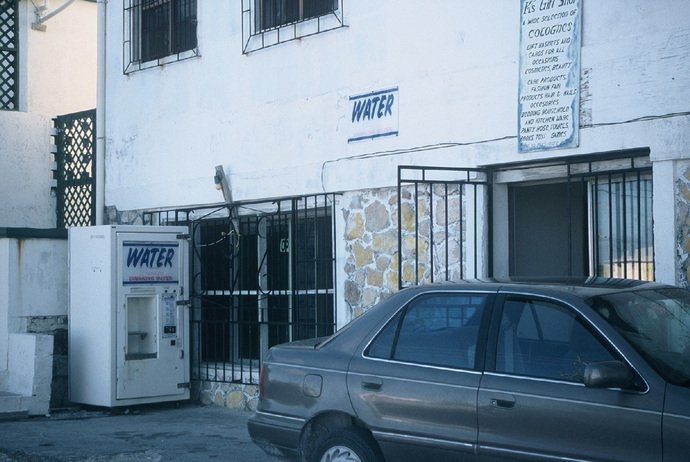 Water vending machine in Grand Turk (photograph by R. V. Wahlgren)
Primary data from a survey of TCI businesses handling produce and/or water was collected during September 2002 fieldwork. The data provides a means of initializing the model so it represents a greenhouse growing a realistic crop mix. The data allows us to assess imported food quality, food/bottled water distribution, delivery preferences, cool storage capacity, and tourist demand for produce.

Our Business Plan reviews required financing and sources. About USD 4.9 million is required to establish the business. The plan suggests a business organization for the 3,500 m2 greenhouse. Production planning focuses on common imports. These are commodity produce (tomatoes, sweet peppers, and lettuces) and produce considered as specialties due to high import cost and/or poor shelf life (cucumbers, eggplants, green beans, culinary herbs, strawberries, and cut flowers). Fresh water sales are modeled as being a mix of greenhouse crop irrigation, a community standpipe, co-operative garden plots, the government water utility, tanker trucks, and a bottled water plant.

Revenue from sales of water and produce by the third year of operation is projected to be USD 12 million. A selling price model is presented.  Competition in the produce and water sectors is analyzed. Constraints such as energy costs, transportation costs, human resources, and the small regional economy are discussed. Marketing of greenhouse products as a case lot operation is discussed in terms of production, handling, transport, pricing, and selling.

Input costs in our financial model are discussed. Quality assurance is essential to realize the modeled production levels. The Grand Turk WPG will be the first commercial enterprise to achieve temperate-climate conditions at a subtropical site while producing 200,000 litres/day of fresh water. Grade-making targets, tailored to TCI are suggested.

Net income is projected to be USD 1.8 million in the third year. Return on investment is expected to be 16.8% in year 3. Sensitivity analyses show that the financial success of the proposed business is tied to energy, employee compensation, financing, and water bottling costs. A 40% wind / 60% diesel option as the autonomous energy source for the business is examined for viability. The analysis revealed that grid energy costs for a large development (currently USD 0.17/kWh) would have to rise above USD 0.23/kWh to effect payback periods of less than 10 years.

Our financial model and Business Plan demonstrates that the GT WPG is financially viable because capital costs, financing costs, and operating costs are all in satisfactory relationships to projected revenue. Commercial viability seems assured from analyses of our primary data and numerous discussions with entrepreneurs and government officials, all stressing the strong demand for locally produced food and for alternative sources of potable water.

Bottled water sales have a dramatic impact on the revenues possible for the operation, although water bottling might consume only 20%–40% of the fresh water produced by the greenhouse system. The attractiveness of the WPG technology may depend as much on water bottling expertise as horticultural expertise. The partnership that forms around this project should not forego an immediate diversification into water bottling—the case is compelling.

We conclude with a  'next steps' approach to further research and joint venture formation.

*To whom correspondence should be addressed. E-mail: atmoswater@shaw.ca